I have made a decision this week - it is time to start querying agents with my, Birthstone Unicorns Series, again. Since I sadly parted with my agent a few months ago (documented in earlier post 'So near and yet so far' in March so I won't go over it all) I must confess to having lost my confidence in the process and have been concentrating my efforts on my other project, The Children of Arrosay.  Probably through fear of rejection, but hey as we writers know, rejection is all part of the game. I do believe in my work and feel that it would be highly commerical in the right hands, so I have licked my wounds long enough, it is time to get back on the horse (or maybe unicorn!) and start again.

Decision made, I just need to work on my query letter and maybe tweak my synopsis and then I will be ready. Quite excited by the prospect again now. Fingers crossed!
Posted by Suzanne Furness at 16:32 2 comments:

Someone asked me the other day, "Where do you get your inspiration?" A common question for any writer I'm sure, but on this occasion it got me thinking about a particular place that inspired me.

Three years ago I spent a fabulous few weeks with family and friends travelling in America. We saw many fascinating sights and built up a lifetime of memories but one place in particular stayed very much with me when we returned home - Lassen Volcanic National Park in northeastern, California. This place was so unlike anywhere I had visited before. The colours and contrast in scenery was indeed inspiring. Lush green meadows dotted with abundant wildflowers and criss-crossed with clear tinkling streams, nestled around mountains topped with snow. Waterfalls splashed over rocks, the spray making rainbows in the sunlight. Here you could stand in snow, dressed in shorts and flip flops and somehow not feel cold! And then there were the hydrothermal pits oozing boiling mud and smelling of rotten eggs! Of course the kids thought this was the best part!

But it is that meadow that I can still picture now, and it is that meadow I return to whenever I write about the 'Mystical Meadow,' in The Birthstone Unicorns Series. I'm sure the unicorns would be very happy there! 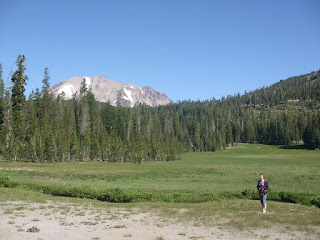 
Posted by Suzanne Furness at 21:36 No comments: 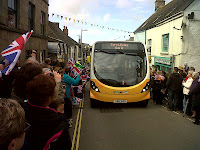 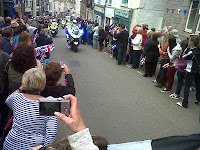 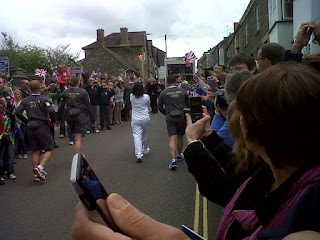 As an update to yesterday's post I thought some of you might be interested in seeing the torch itself. Well you can just see it in the distance! After waiting for ages it sort of sneaked up on us behind all the buses and lorries in the procession! Still worth it though, the atmosphere was great.
Posted by Suzanne Furness at 12:45 3 comments:

The Olympic Torch is here!

Great excitement in my home town this evening as the Olympic Torch arrived on BA Flight 2012 from Athens. The crowds turned out to welcome the long awaited flame and the atmosphere was palpable. I was there an hour or so before the flight arrived and we were entertained by a helicopter display. As the lights of the aircraft appeared through the cloud a ripple ran through the crowd. Cheers and screams could be heard from those lucky enough to be inside the base with the TV crews. Unfortunately we were only just able to identify the party collecting on top of the steps but rushed home afterwards to watch the close up on the TV. So glad I went along to be part of this momentous occasion. Tomorrow morning we will line up to see the early stages of the torch relay. 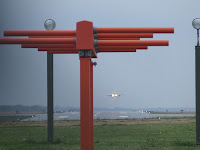 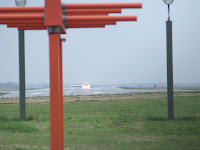 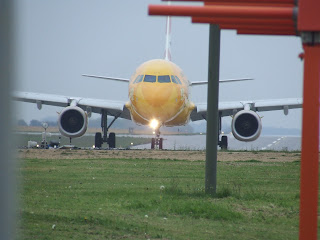 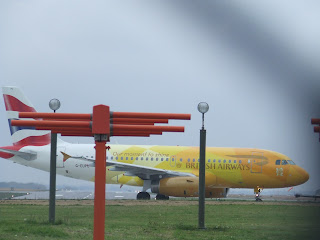 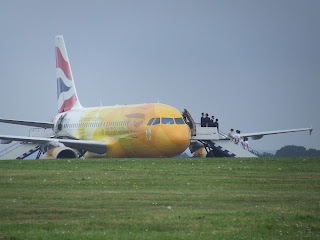 Posted by Suzanne Furness at 21:40 No comments:

Sorry I haven't posted for a few days, life has been pretty hectic this week! I have been working on a couple of short stories that I wanted to enter into competitions that close this month. I have also been working on editing, The Children of Arrosay, my teen fantasy manuscript. Happily, I can report that two short stories have been sent out into the big wide world via email and one just needs printing out and posting! Fingers crossed they meet with favourable reviews from the judges! I'll let you know how I get on.

Meanwhile, the editing seems to be going well and coming together. So all in all the hard work is well worth it.

Oblivious to the steam coming off my computer is my feline companion, Buttons, who quite frankly can sleep through anything! 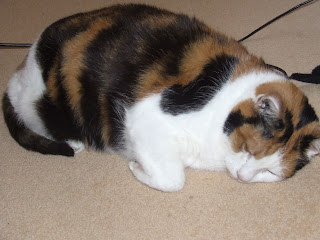 Today's post is a chapter taken from,  Emerald, The May Birthstone Unicorn. Hope you enjoy reading it. Please feel free to leave any comments or feedback.


“Thanks,” Freya sat up in bed and stretched as Dad placed the mound of parcels on the duvet.


It wasn’t long before her bed was covered in shredded paper, books, games, DVD’s and new clothes. Finally, Freya opened a small package wrapped in brown paper that had come all the way from her Grandmother, or Nonna as she usually called her, in Italy. Freya gasped in delight as she peeled away layers of tissue paper to reveal a silver chain with a unicorn pendant hanging from it.


“Oh, isn’t it lovely,” Freya smiled as she tried to put the necklace on straight away.
“It is darling. Here let me help you,” Mum said, learning over to fasten the clasp around Freya’s neck.


“Now then, how about you sort this lot out and I’ll go and get some breakfast on,” Dad suggested.


“Good idea. I’ll go and help Lucas get dressed and pack a bag for him to take to Granny’s,” Mum said, scooping Lucas out of the pile of wrapping paper.


By half past nine they were in the car and on the way. Lucas had fully woken up and was giggling madly as Freya played a game of peek-a-boo with him. Once Lucas was happily settled with Gran it was off it pick up Amy.


Amy was waiting by the front door when they arrived and bounded over to them as soon as Dad stopped the car.


Both girls chatted excitedly in the back seat all the way.
“What shall we go and see first? Oh I know the penguins, they’re so funny,” Amy laughed.


“What about the giraffe’s?” Freya suggested, “I heard on the news the other day they’d had a baby.”


“Don’t worry girls; I’m sure we’ll have time to see all the animals,” Dad said. “We’re nearly there now, look out for the signs.”


Both girls pressed their noses to the window and peered out expectantly.

In Stardust Land Emerald, and all her friends, waited expectantly too.


The May Dance was due to start shortly and the elf dancers made last minute adjustments to their costumes. Emerald stood silently on her own, she liked to soak up the atmosphere before the celebration began.  The unicorn smiled as she watched, Elvina, try to tame her hair.


“Oh these flowers won’t stay in my hair,” Elvina wailed, as she frantically tried to push the sweet smelling lily of the valley back into her wild red hair.


“Here let me help you,” her friend, Eldora said, reaching into her pocket for some more hair grips.


The girl's  were dressed in lemon coloured dresses. They wore silver slippers on their feet and multi coloured strands of ribbon floated from their wrists.


The boys looked very smart in their knee length green shorts and lemon shirts that matched the girl’s dresses. They wore black shoes with silver buckles, and instead of ribbons, they carried willow sticks covered in bells that jingled every time they moved.


“Morven has just arrived in the meadow,” Sky, the pink tree sprite, fluttered around Emerald's head like a piece of falling cherry blossom.


Morven is the oldest elf in The Enchanted Wood. He is so old even he lost count of his birthdays years ago!  All eyes were on the elf as he picked his way across the meadow towards his carved wooden seat.  Morven adjusted the crown of flowers that rested like magic on his bald head.  As he sat down carefully, taking care not to trip on his long beard that reached all the way to his toes, Emerald felt her flank twitch with anticipation.


A hush fell over the meadow as Emerald, and the other eleven unicorns, took their places to form a dancing circle. Their long manes shimmered like golden waterfalls down their necks and the birthstone jewels in their horns had been polished till they shone. Little slivers of colour danced on the ground around them as they tossed their heads.

Morven looked to the skies, the sun was high. It was time. The old elf stood, turned towards the Mystical Lake, where the band of water sprites sat on lily pads, their reed flutes and wooden fiddles at the ready. As Morven raised his hand above his head, not even a bird chirruped or a frog croaked. Morven swept his hand down and the band sprang into life. Dancers emerged from the trees to cheers and claps from the watching crowd of elves and woodland creatures.


The sound of music, bells and laughter filled the wood as the dancers wove their way in and out the circle of unicorns. As the dance finally slowed,  Emerald, the May Birthstone Unicorn, was led into the centre of the circle.  The elves danced while the tree sprites fluttered around clipping wild flowers and blossom into Emerald’s mane. Emerald stood proudly in the centre, her heart fluttering as much as the tiny tree sprites around her.  At the end of the dance she gave a bow; May was her month and today she felt very special.


Posted by Suzanne Furness at 11:00 No comments:

As some of you may know I have written a series of children's stories, The Birthstone Unicorns, that are centred around the months of the year and their unique birthstone. As promised I have posted details of this month's birthstone, Emerald, in the side bar. I will be updating this every month so be sure to pop back regularly. Check out the month of your birthday or that of a friend or loved one. Below is the verse for May taken from an old birthstone poem first published in 1870 from the Gregorian Calender.

"Who first beholds the light of day
In spring's sweet, flower month of May
And wears an Emerald all her life
Shall be a loved and a loving wife."

I shall be posting an extract from my Emerald Birthstone Unicorn Story over the weekend. In the meantime, Happy Birthday to all who celebrate a birthday this month.

Posted by Suzanne Furness at 17:49 No comments: