If you have followed my blog for a while you will no doubt have read some of my posts on birthstones. I have been fascinated by gems and the various legends that surround them for years. Indeed, it was combining my interest with them and my obsession fondness for unicorns that was the inspiration for my Birthstone Unicorn early reader series.

It has been a couple of years since I wrote about birthstones on my blog so I thought it might be fun to revisit some of my earlier posts.

If you, or someone you know, is celebrating a birthday during January then let me tell you a little more about the lovely Garnet, this month's birthstone. My birthday is this month so it is a particular favourite of mine! Here is my own little birthstone unicorn . . . 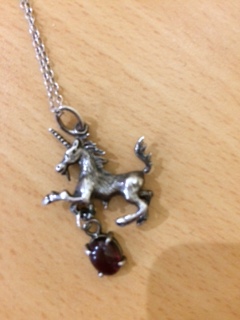 The traditional birthstone for January, the garnet is normally thought of as deep red in colour but they can actually be found in many other colours such as orange, yellow, green, purple, brown and black. Associated with purity, truth, faithfulness and friendship they are also thought to remove negativity in the wearer. I'm definitely going to be wearing my garnet this month to ensure I start the the year with lots of positive thoughts!
There are lots of stories and legends surrounding the garnet below are just a few!
* Legend suggests that the garnet originated with Persephone, the Greek goddess of sunshine. Persephone was captured by Hades, the god of the underworld. Hades gave Persephone some pomegranate seeds to ensure her return. Take a look at the seeds next time you eat a pomegranate!* The word garnet comes from the Latin 'granatus' which  means seed.
* Garnet is said to prevent bloodshed between enemies.
* Garnets have been found in burial sites dating back to 3000 BC. It is thought they were placed there to protect the dead on their journey to the afterlife.
* Stories from the Bible say that Noah hung a garnet on the ark to help light the way through the flood.
* Native American tribes decorated dream catchers with garnets and used them on their hunting shields.
* Many cultures have suggested the wearing of a garnet would help calm a fever, protect from poison, reduce swelling and stop bleeding.
* Some Eastern  Legend says that dragon's eyes were garnets. 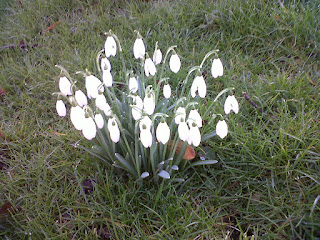 There are two very different flowers for the month of January the showy carnation and the simple elegance of the snowdrop.
(pictured)


Traditionally birthstones represent a month of the year based on the Gregorian calendar. There is a poem about the associated birthstones and below is the verse for January. The poem was first published in 1870 by Tiffany & Co. The original author is unknown.

By her who in this month was born
No gem save garnets shall be worn
They will ensure her constancy
True friendship and fidelity.
﻿
Happy birthday if you are celebrating this month! Stop by the blog next month to read about the February birthstone, Amethyst.

Posted by Suzanne Furness at 07:43