What a fantastic few days I had this week. Those of you who read last Friday's post may remember my hubby was arranging a 'surprise' for our anniversary. When I wrote that post I had no idea what we were doing or where we were going - it was all very mysterious. I was told I would be staying away overnight so my first dilemma was what to pack? What would I need? Luckily eldest daughter ( who was in on things!) helped me there.

First thing Tuesday morning I was stood in the hallway with my bags packed. Normally it is me who organises things. I felt a little out of control! I thought we were driving somewhere until daughter got in car with us! We were dropped at the train station and wished a good trip. Okay ....

We were headed for London and would actually be away two nights. (Mental scan of suitcase contents!).

Some five hours later we arrived in London and caught a taxi. I did not hear husband's instructions to driver, so I am still clueless as to our destination.

Like most folks I guess, I have a bucket list of things I would like to do. Many, I'm sure, will end up being just nice things to dream about, but occasionally we get the chance to tick off some of those dreams. Turns out I was about to be making one big tick on my bucket list.

A short taxi ride later and we pull up outside The Ritz! Afternoon tea at The Ritz has been on my wish list for years. I wasn't disappointed. That place is gorgeous. So glad daughter suggested the dress I was wearing to travel in!

The tea was wonderfully charming. We spent as long as we possibly could over it. Is it possible to overdose on pretty little cakes? I think it is because I couldn't eat a thing for the rest of the day. I did not feel it was the place to whip out my camera, sort of didn't seem right to spoil the mood, so you will have to take my word for it. Imagine, floral cake stands, silver teapots, piano music and waiters in tailcoats .... Truly a treat to remember.

But we were in London, so plenty of other exciting things to do and see. A trip to the theatre to see Warhorse and a glimpse of the Queen in her state carriage on the way to the re-opening of parliament. We were in the right place at the right time for that one. 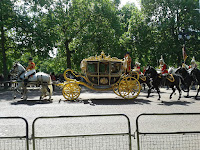 On the second evening we managed to tick something off my husband's bucket list too. He has always enjoyed listening to jazz music and so he had arranged a trip to Ronnie Scott's Jazz club. Another great experience and I am so glad we got to do something he has always wanted to do too.

Back at home now and reality. I'm in a bit of a daze. The trip must have taken him months to organise but it is something we will both look back on with very fond memories for a long time.

Posted by Suzanne Furness at 09:12